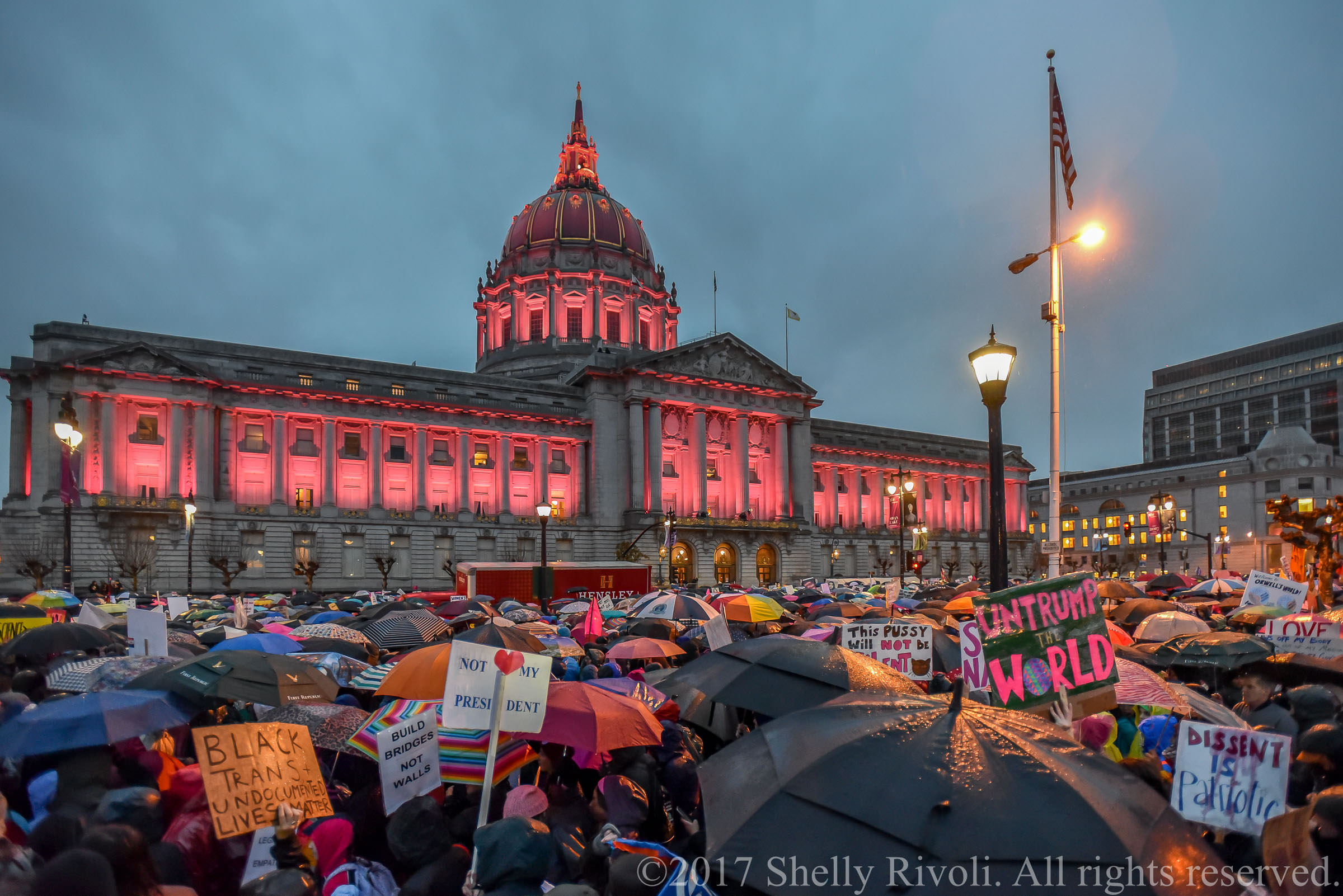 Four years ago today, the first Women’s Marches sprang up around the globe. An estimated 100,000 people assembled for the event in San Francisco alone — an impressive figure, especially when you consider that Oakland had already had 100,000 Women’s Marchers earlier in the day, San Jose weighed in with 25,000, and some smaller towns like Walnut Creek hosted their own events as well.

In San Francisco, the official Women’s March events didn’t start until 3:00 p.m. Pacific Time, when a spirited rally kicked off at Civic Center Plaza in front of City Hall. Gray clouds gathered above as activists and celebrities spoke to the crowd, and Joan Baez led everyone in a chorus of “We Shall Overcome.” 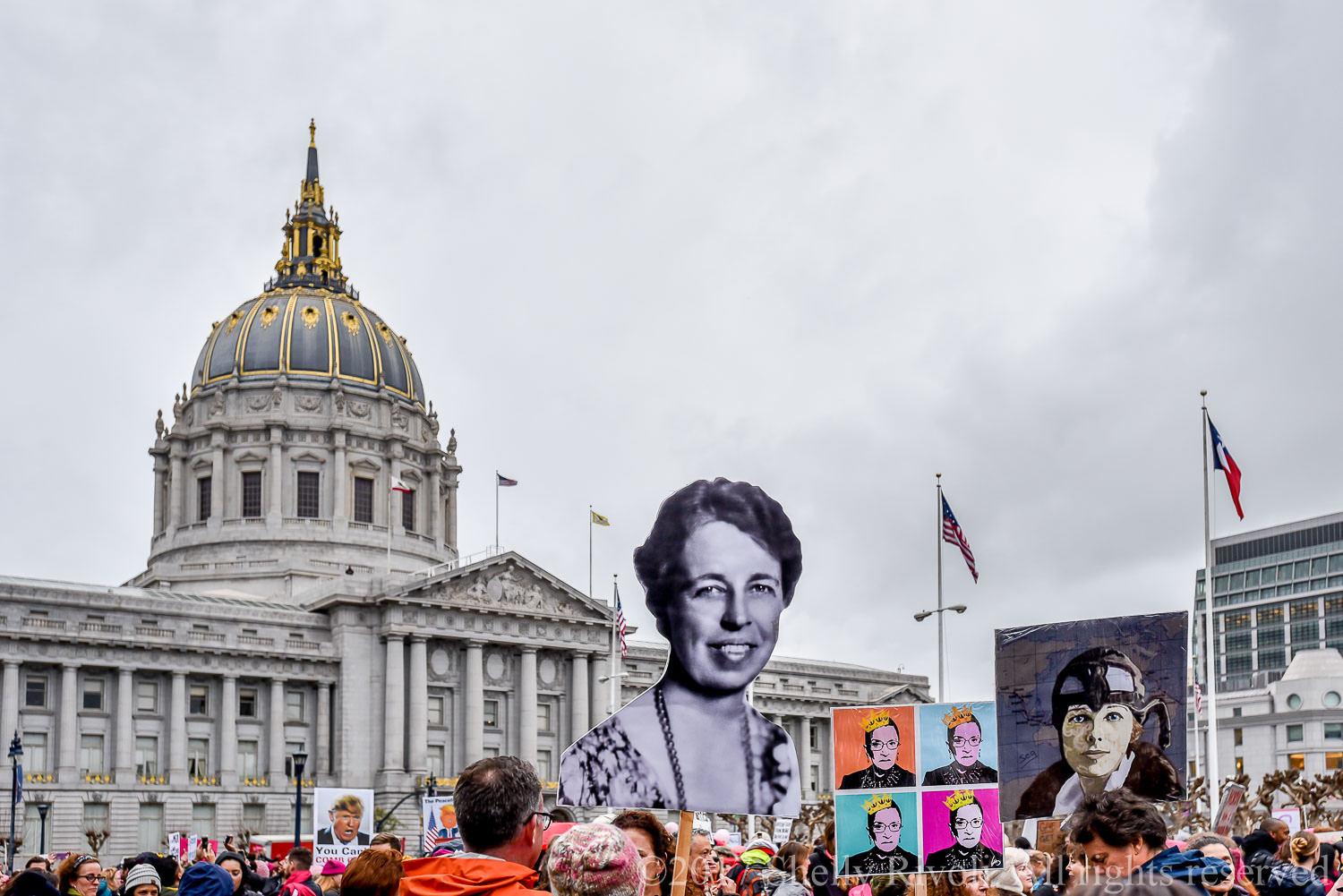 Familiar faces of famous women in history rose above the assembling crowd, with signs featuring Eleanor Roosevelt, Ruth Bader Ginsburg, and Amelia Earhart among others.

Everywhere you looked, “pussy hats” could be seen, mostly in pink. Many were hand-knit or sewn with the cat-like ears, while others were simply stocking caps modified with rubber bands or string to create the effect.

Each hat was a visual reminder — and protest — of the crude term Donald Trump used to describe women’s genitalia (and how he thought it should be treated) in a recording that surfaced during the 2016 election. 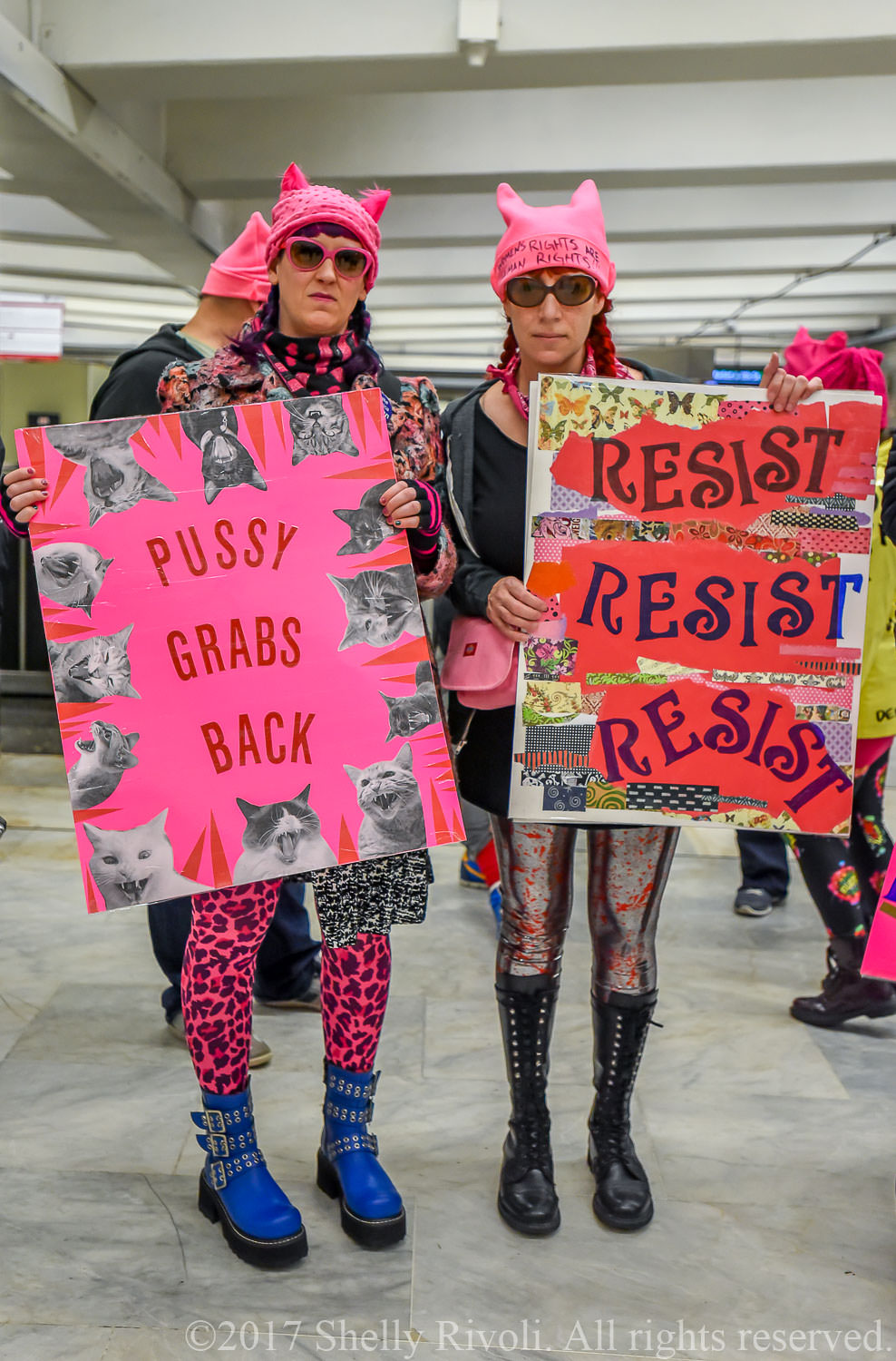 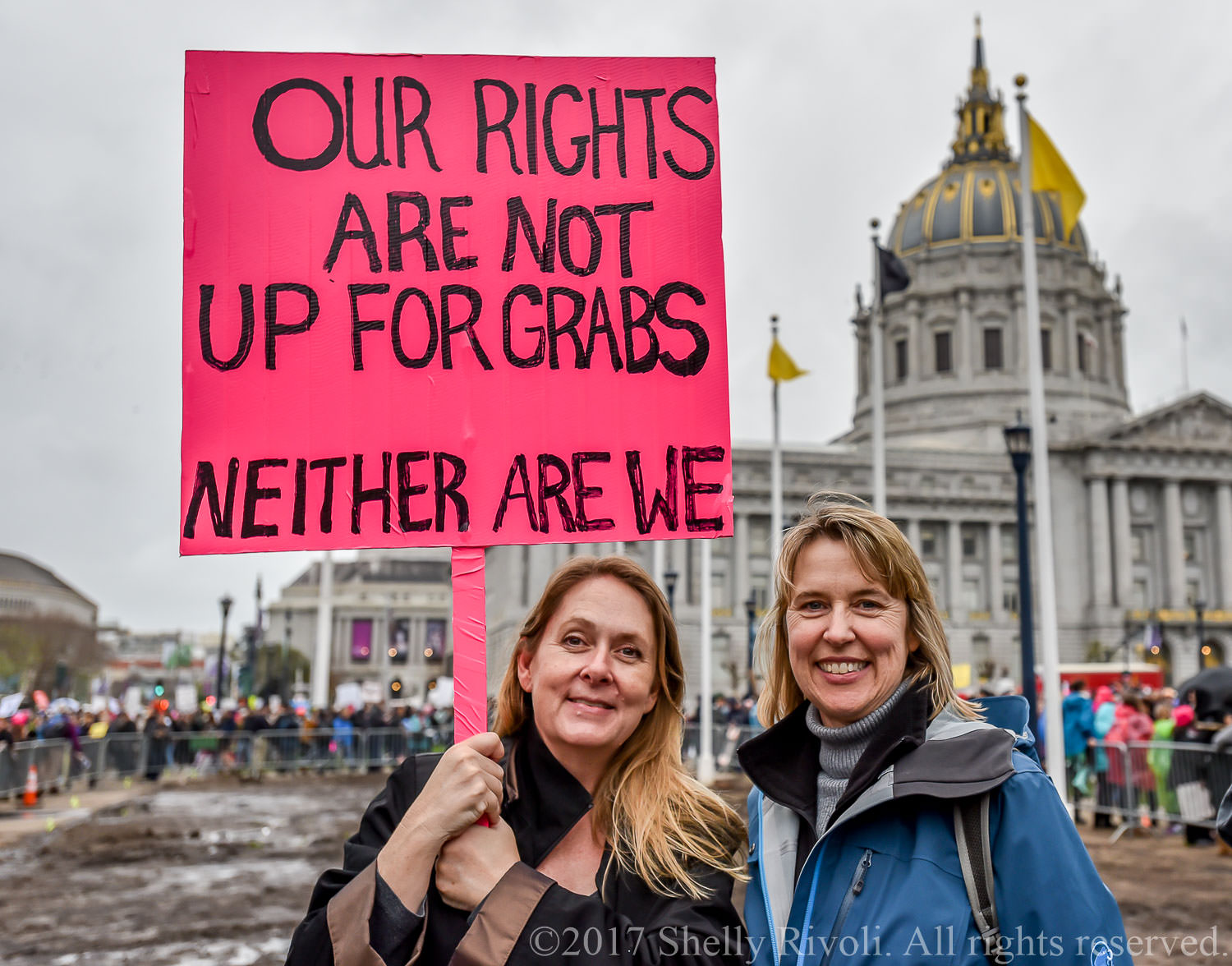 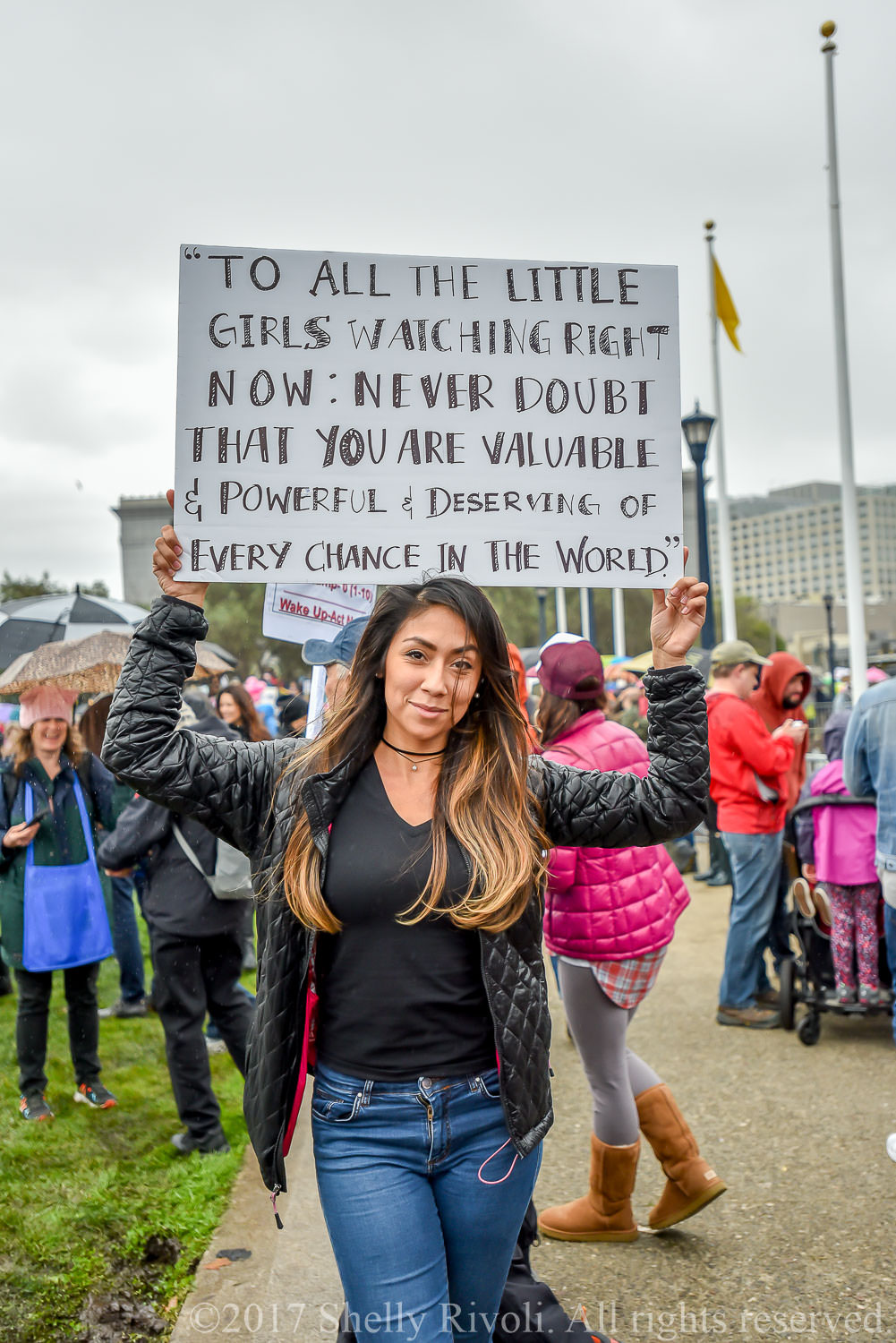 “To all the little girls…” the quote from Hillary Clinton’s concession speech on display as a sign at the Women’s March 2017. 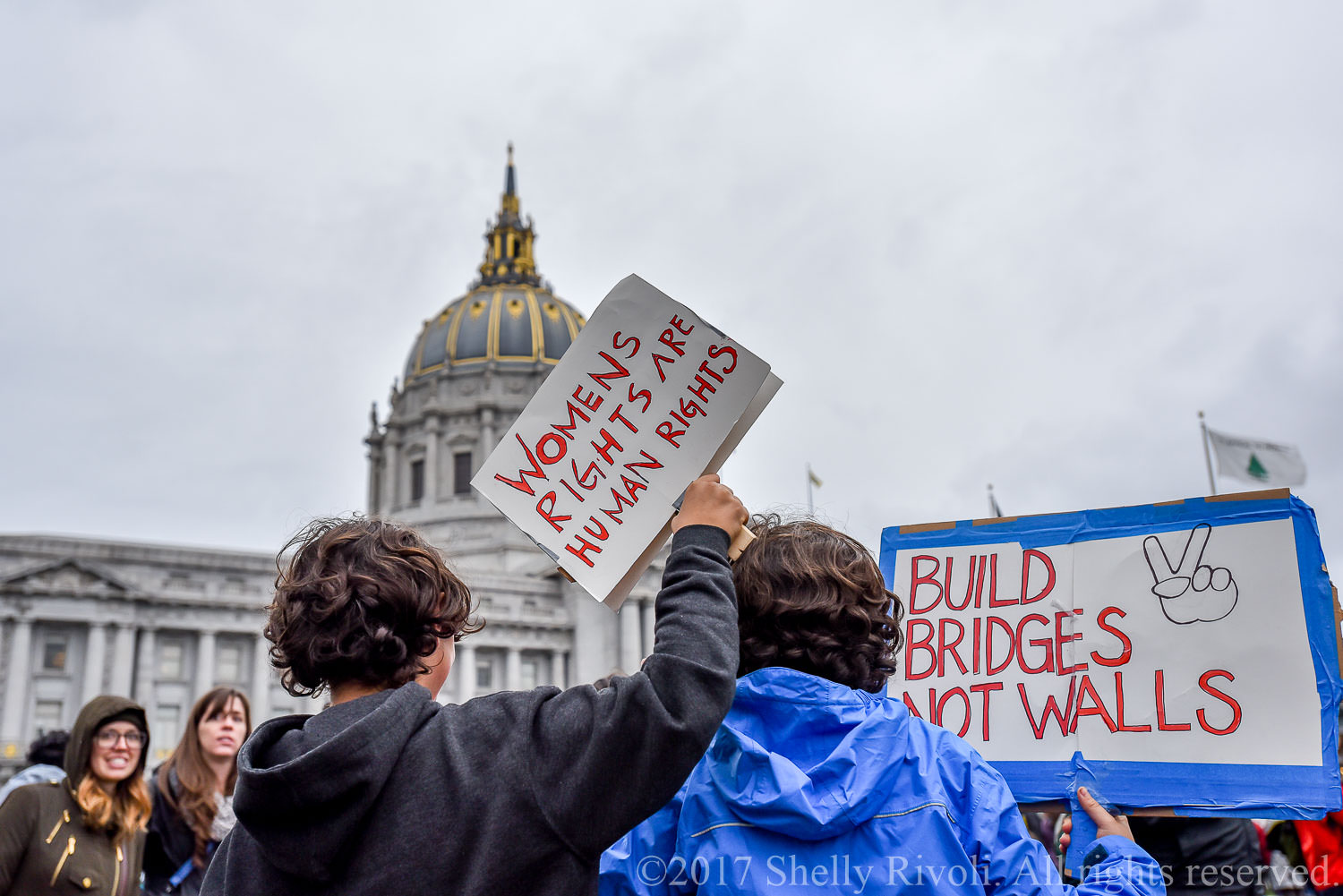 Many children turned out in attendance as well, whether carrying signs of their own or riding on the shoulders of parents. 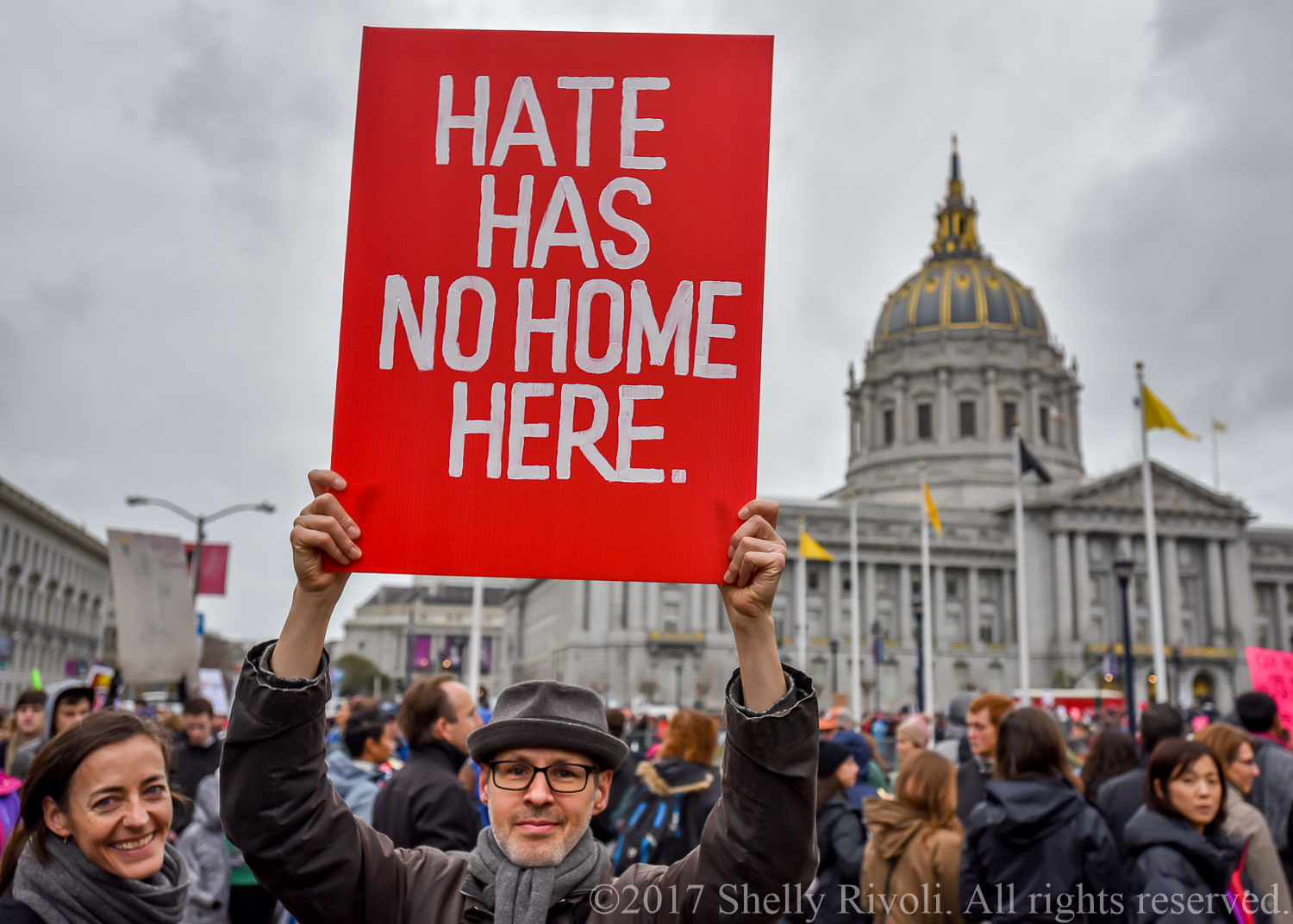 Messages rejecting hatred and bigotry were among those promoting women’s equality and rights. 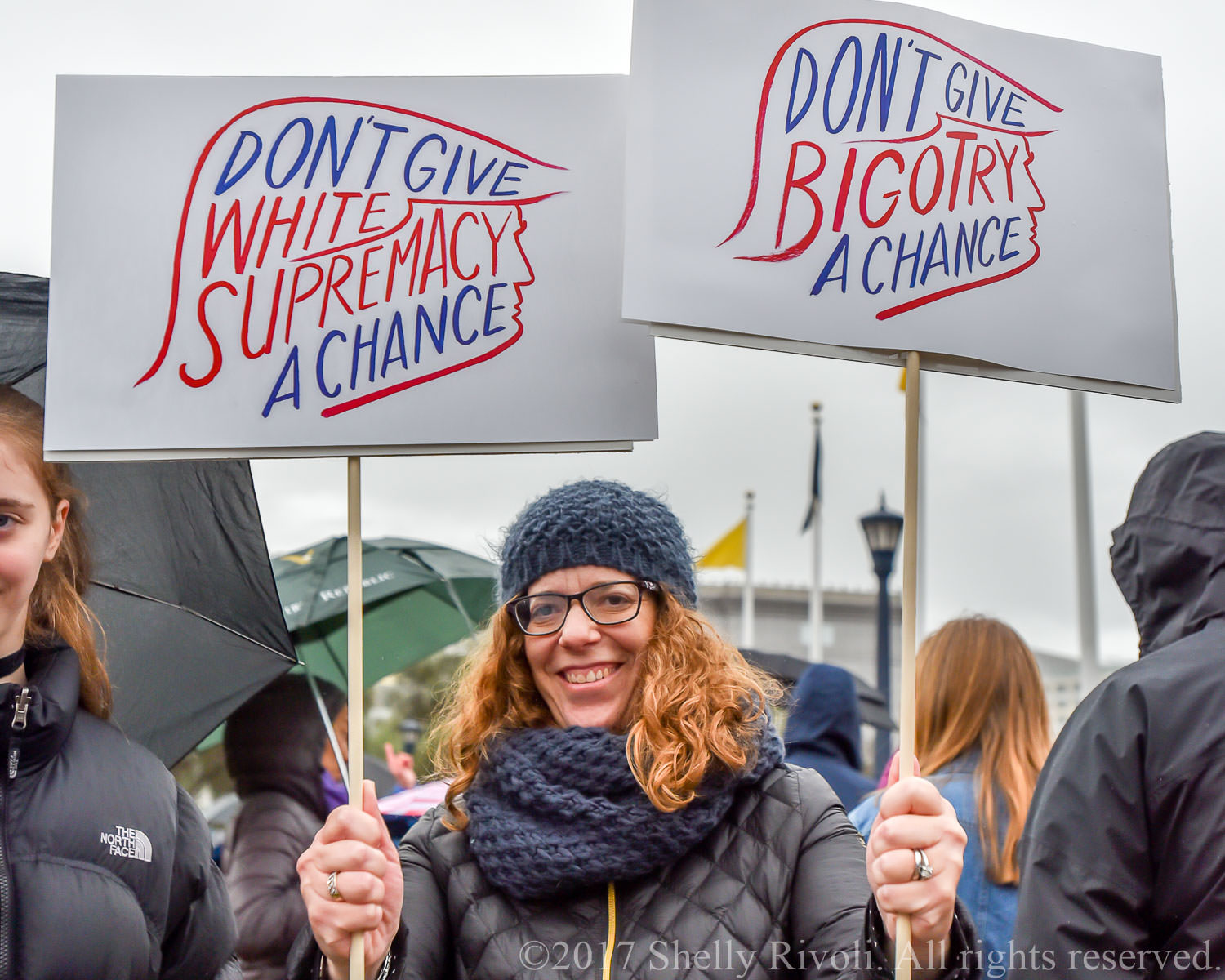 Signs protesting white supremacy and bigotry within a line portrait of Donald Trump, issues which would snowball during the four years of his administration following this day. 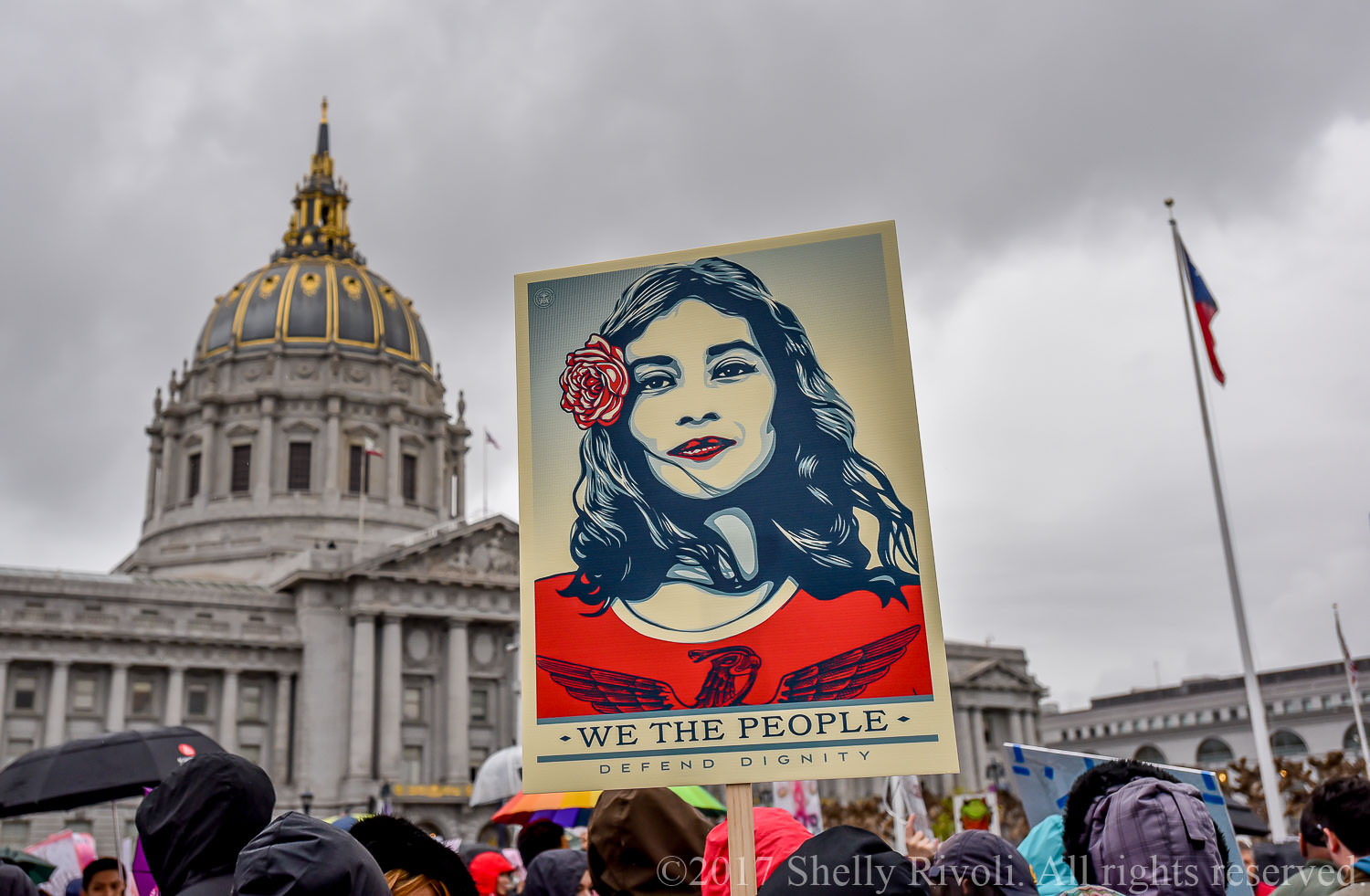 The new political artwork of Shepard Fairey debuted on signs at Women’s Marches around the world in 2017. Here a Latina appears above the words “We the people defend dignity.”

The first rain drops fell as the rally concluded, and the lights of San Francisco City Hall flashed on in a warm pink glow in honor of the event.

The sea of protest signs transformed into a sea of umbrellas. And soon the crowd began to flow from Civic Center Plaza toward Market Street, and on toward the Ferry Building. 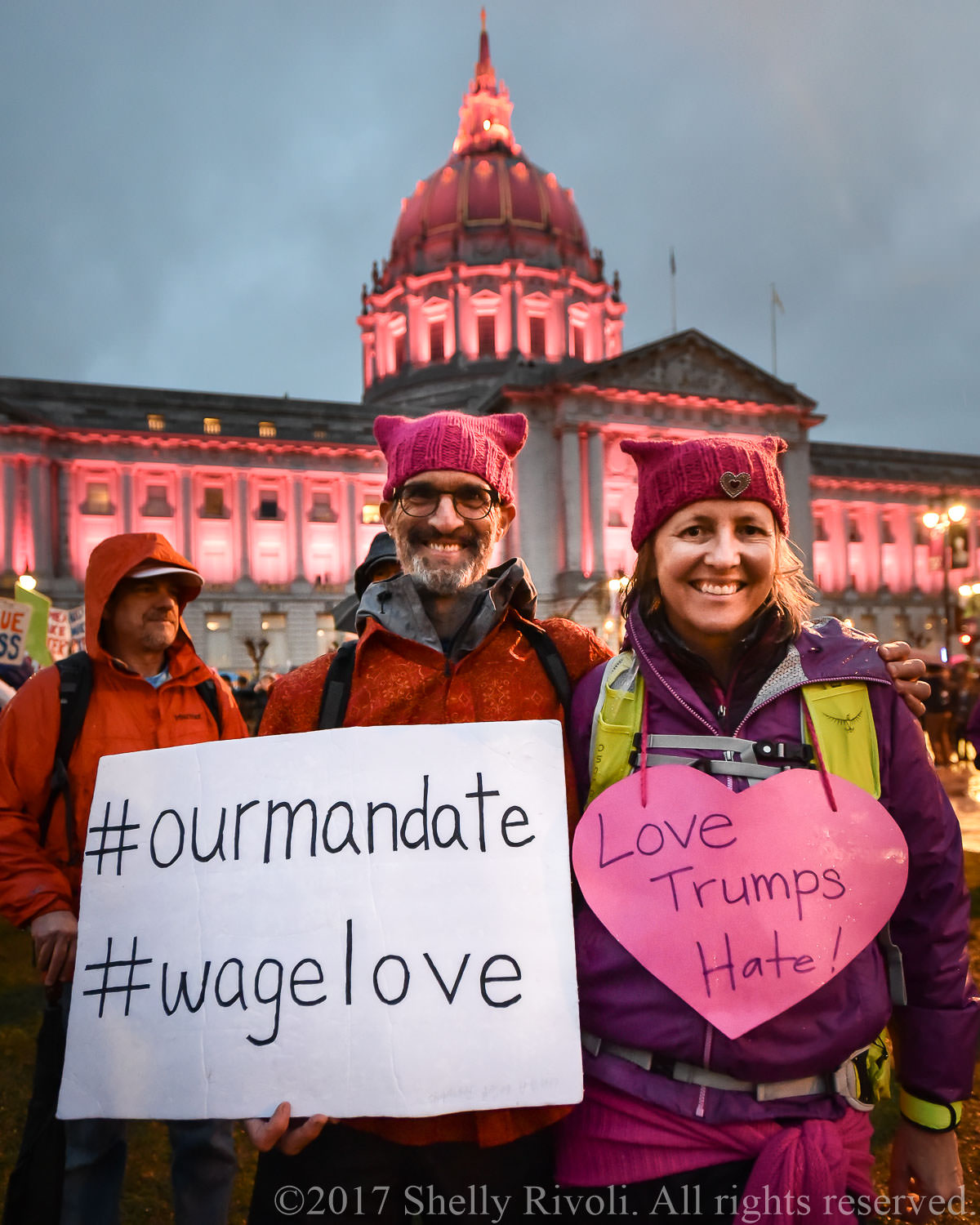 Women were not the only ones wearing pink pussy hats at the 2017 Women’s March in San Francisco. 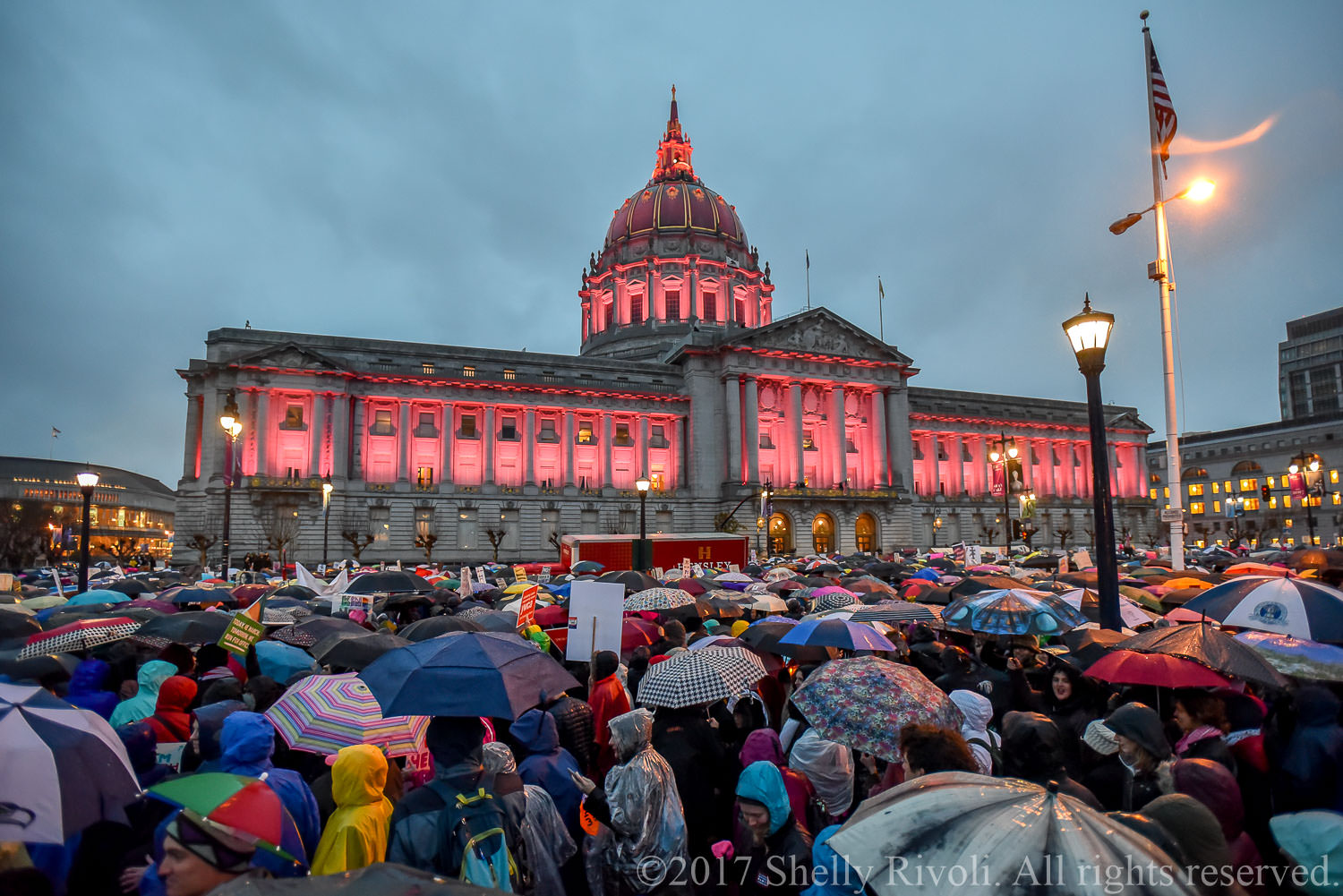 With umbrellas raised against the rain, demonstrators began to march toward Market Street. 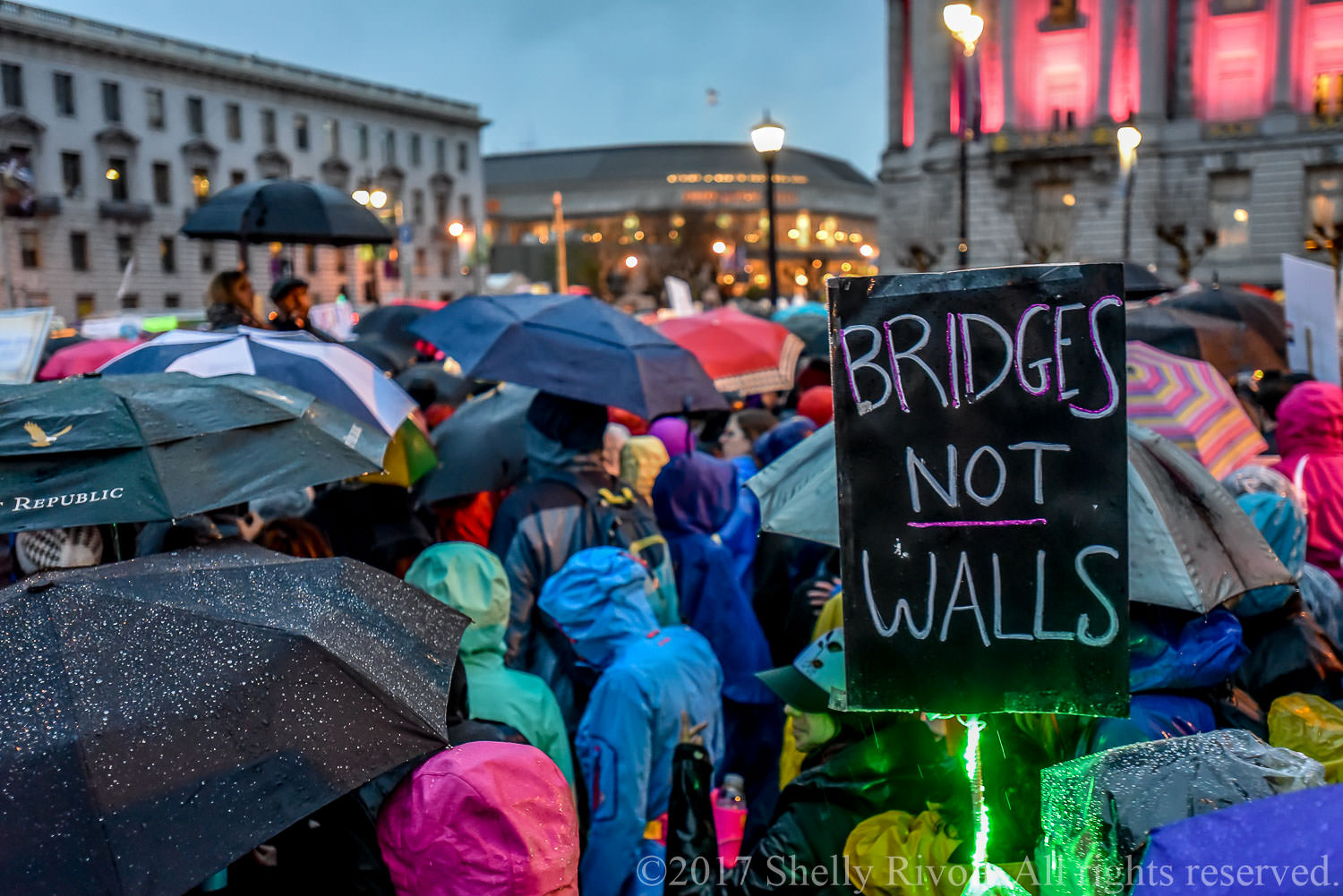 Marchers make way for Market Street with a sign reading, “Build bridges, not walls,” in protest of Trump’s promises to build a wall between the U.S. and Mexico. 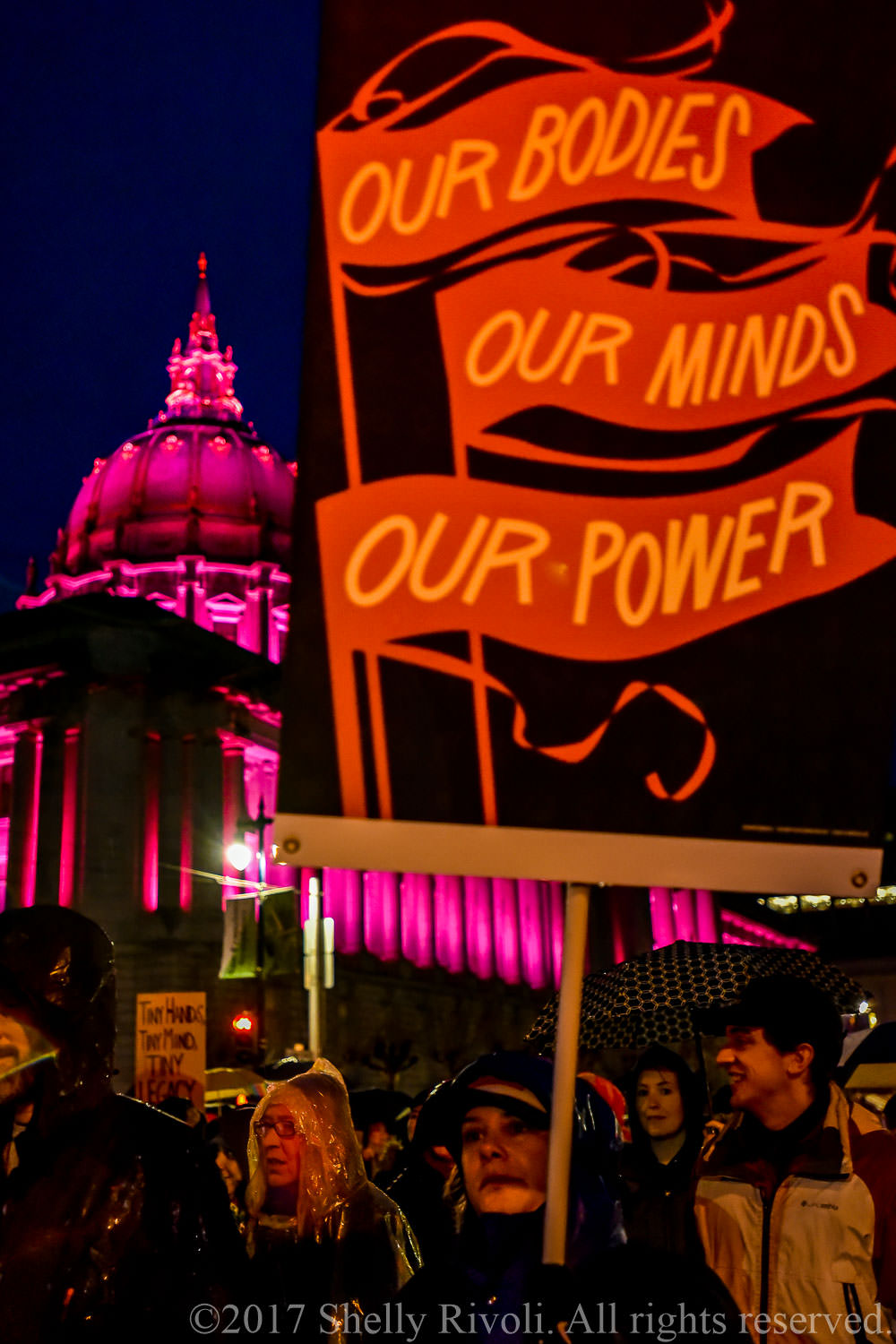 Marchers move past the glowing City Hall toward Market Street, one carrying the “Our bodies, Our minds, Our power,” sign created by Jennifer Maravillas for the 2017 Women’s March.

Women’s Marches would take place again in each of the three years to follow during Trump’s presidency. Each year saw a different theme and emphasis. Click here to see more photos from the 2017 San Francisco Women’s March. (Digital downloads and prints are available.)

You can also view photos from each of the following San Francisco Women’s Marches and other major SF protests during the Trump administration see my photo archives.

I specialize in candid, active, family photography that combines elements of lifestyle and documentary style work. I’m happy to include well-behaved pets as members of the family (see details in Rates & Packages). I’m based in the San Francisco Bay Area, serving Berkeley, El Cerrito, Albany, Kensington, and Emeryville areas. 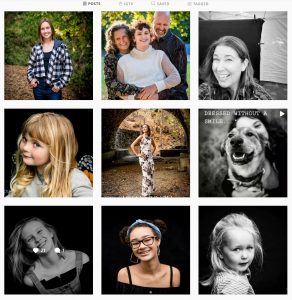